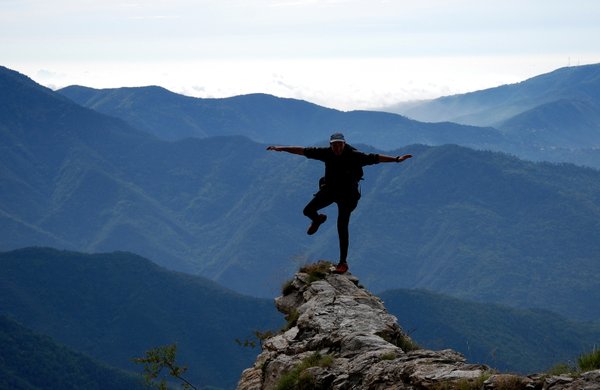 Meet Lorenzo
Lorenzo was brought up in Liguria until the age of 18.

He has spent the last 30 years in the UK in Northamptonshire and Buckinghamshire where he has attended to his successful Interior Landscape business. Now back in his beloved Liguria, he leads outdoor activities in the area. His knowledge of Liguria is unsurpassed, having hit these trails since childhood. Lorenzo's passion for the outdoors has led him to exotic and remote locations of the world in pursuit of his passion for climbing high peaks. He has summited mountains such as Denali in Alaska, Lhotse in the Himalayas and the much closer Matterhorn, and during April and May 2006 he summitted Everest from Tibet. In Janaury 2009, having summited Vinson Massif on Antarctica, Lorenzo become only the third Italian to have completed the Seven Summits challenge - climbing the highest mountain on each of the World's seven continents.

He holds a valid British certificate in Mountain first aid and rescue.

With his perfect knowledge of both the English and Italian languages, and understanding of the local cultures and traditions you are assured of a very professional, caring and attentive guide.

Lorenzo helped organise the first Ultra Distance Running Trail in Italy together with a local international athlete. Many international athletes attended the event on July 21 2007 in the village of Dolcedo. He is also a founder member of a local association which organises outdoor activities in the area including the 7 summits challenge of the Ligurian Alps every June and July.

Looking forward to meeting you in sunny Liguria.